We provide students with plenty of hands-on learning opportunities to get involved and prepare for life beyond the classroom.

The project was a collaboration between the Earth and Geographic Sciences and Industrial Technology Departments, and the Nashua River Watershed Association. Sean designed and constructed a 3D computer model of the Nashua River Watershed using GIS and other technologies in the geospatial research lab in the Earth and Geographic Sciences Department. The model was then sent to the Industrial Technology Department for 3D printing. One copy of the printed 3D model will be displayed at the River Resource Center at the Nashua River Watershed Association office. The project was a success both technically and in fostering partnerships between the University and the community-based organizations.

Jesse Corbin - GIS Internship with the Snowriders of the Nashaway

Jesse worked as a GIS Intern for the Snow-Riders of the Nashaway, a subgroup of the Snowmobile Association of Massachusetts (SAM). His main tasks were to collect trail data using a GPS unit and create both printable and online interactive trail maps in a GIS. Jesse hiked and occasionally rode on an offload vehicle with club members in the process of trail data collection. The collected GPS data was then downloaded and processed in a GIS to create a series of trail maps for the Snow-Riders. Jesse’s work was a big help to the maintenance and upkeep of the trails within the Nashaway/Wachusett region. 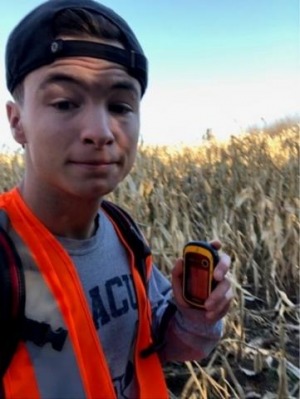 Ed interned with the Planning Department at City Hall in Leominster, MA. Ed assisted the planning director and staff in analyzing and verifying subdivision and special permit applications, aided the transition to digitization through electronic record conversion, and incorporated GIS elements to the department. He also assisted the Assessors Department in updating the city zoning and overlaying maps using GIS and the Mayor’s office in organizing community outreach events. Ed was the first Public Planning intern at the Leominster City Hall and his work was very much appreciated. 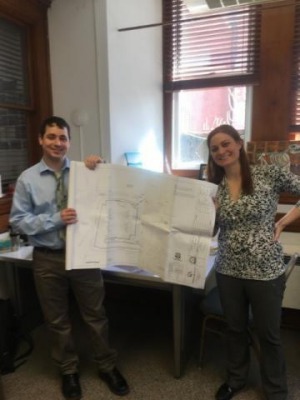 Ed with his supervisor, Elizabeth Wood.

Caroline was involved in the Worcester County Overdose Death Response Initiative Project. The project is a joint research coordination with the Middle District Attorney’s Office, the Geographic Science and Technology Program, and the Criminal Justice Program at Fitchburg State. Caroline mainly focused on studying the drug epidemic in the city of Fitchburg. Numeric and spatial analyses were conducted in a GIS to examine the temporal and spatial pattern of the drug crisis. Caroline’s semester-long work laid a solid foundation for the two-year project. 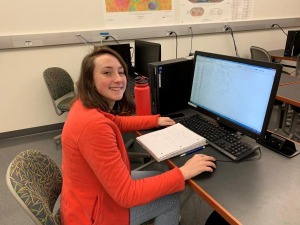 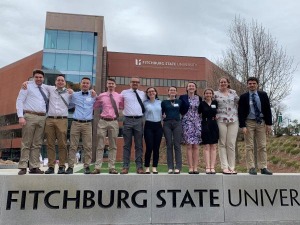 The Analysis of the Land Use and Land Cover of the Nashua River Watershed
(Sam presented in all four conferences since 2016 during his four-year study at Fitchburg State. His story is published in the Contact, the Fitchburg State magazine.)

Designing and Printing a 3D Model of the Nashua River Watershed

Mapping the Opioid Epidemic in Fitchburg

Simulations of the Nashua River Flooding in Fitchburg

The Sedimentation and Geomorphology of the Nashua River

A Submerging Paradise: Climate Change in the Polynesian Islands

The Challenges of Climate Change in Indonesia

Feeding the World's Population One Underwater Plant at a Time

The Meat Industry: What's at Steak?

Conservation of Biodiversity Hotspots: Critical Regions of the World

Costa Rica: A Sustainability Leader of the World

Sam Gallagher and Caroline Anderson presented at the New England Urban and Regional Information Systems Association (NEURISA) Annual Conference on Oct 15th, 2018 in Beverly MA. Their presentation, titled “GIS Analysis of Land Use and Potential Flooding in the Nashua River Watershed”, gave the audience an overview of the research projects they conducted in summer 2018.

Samantha studied micro-plastic and the health of the Nashua River, supervised by Dr. Liz Gordon. 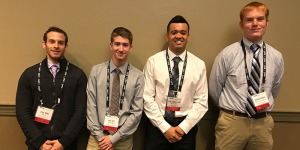 Tim, Nick, Jacob, Sean and Dr. Jane Huang were invited to present at the New England Urban and Regional Information Systems Association (NEURISA) Annual Conference on Oct 16th, 2017. Their presentation, titled “Studying Environmental and Public Health in the Fitchburg Area Using GIS”, gave the audience an overview of the research projects they conducted in summer 2017. 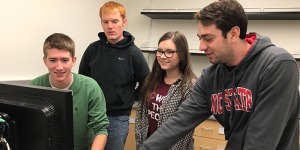 As a continuation of the Reimagine North of Main Neighborhood Revitalization Project, Jake, Tim, Sean, and Tallie helped the city inventory the industrial and commercial properties in Fitchburg. The inventory was performed through internet search, phone interview, and field survey. Once the inventory is completed, the properties will be mapped and analyzed in a GIS. The results will help the city understand the usages of the industrial and commercial properties and develop revitalization plans. 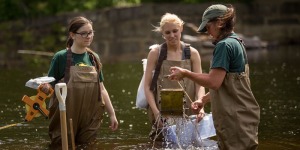 Tallie Foster and Kaitlin Berube studied sediment and the health of the Nashua River, supervised by Dr. Liz Gordon 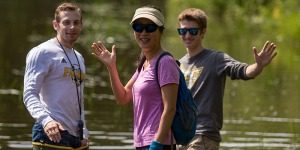 Jacob Hogue and Sean Beverly applied GIS in the study of the health of the Nashua River, supervised by Dr. Jane Huang 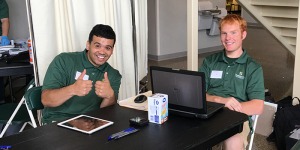 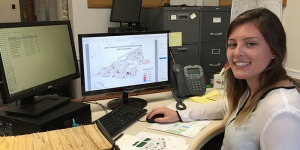 Ali has been mapping the cemetery plots for the three public cemeteries in the City of Gardner. She’s linked the cemetery database, which is in MS Access, to the GIS data and resolved data issues to get to a 100% match rate. Resolution steps involve researching cards, field mapping, historical record research, and access database editing. Ali’s work has been very appreciated by the engineering department and cemetery department at the City of Gardner. Ali is supervised by Ms. Rachael Catlow, GISP, GIS Coordinator, City of Gardner. Ms. Catlow has been a guest speaker and a friend of the Earth and Geographic Sciences Department at Fitchburg State University. 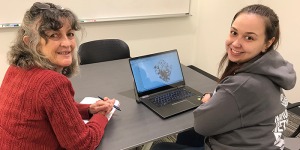 Victoria is helping to prepare multi-layered GIS maps in order to prioritize land parcels that NCLT would like to conserve in the future. Part of her tasks include identifying areas crossing town boundaries that may be of interest for an overall outreach to landowners, town boards, and commissions. Victoria’s work contributes to the NCLT’s long term strategic land conservation plan. Victoria is supervised by Ms. Jassy Bratko, Director of Land Protection at NCLT. 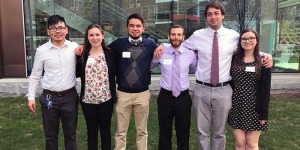 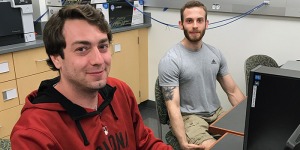 In this extended Crocker Center research project, Jacob and Jake conducted a series of mapping and analysis for the Reimagine North of Main Project in the Fitchburg area. Jacob and Jake used GIS and web-mapping tools for the project. 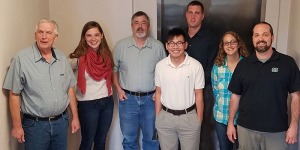 Huy Vo (center in white polo shirt), Class of 2018, and coworkers during his internship

Huy, majoring in Computer Science and minoring in GIS, works on GIS Web Mapping and Programming under the supervision of GIS/IT director Jason Stanton.

Huy uses JavaScript, HTML and CSS to improve the performance of MRMapper – a web mapping tool designed to aid decision making processes. He is also the initiator and the first president of the newly established GIS Club, which attracts students within and beyond the Earth and Geographic Sciences department. 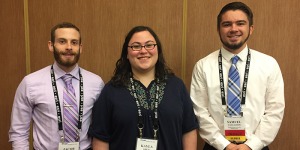 They were the only student presenters at this regional GIS conference which was attended by over a hundred GIS professionals crossed the region.

They spoke about the GIS research conducted during their internships on the local community revitalization project, ReImagine North of Main. They also enjoyed the many questions, comments, and compliments from the audience following the presentation. 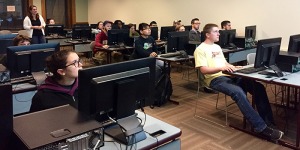 The students worked on a Raster GIS workshop, which was to determine an area of maple trees to tap for maple syrup in Paxton, MA. They also listened to three presentations given by Clark graduate students in GIS.

It was a blast! The event was organized by Henry Mros, a GST graduate (2015) and currently a Master’s student in GIS at Clark University, and two GIS Club leaders: Huy Vo and Mark Guercio.

Several students in our department shined bright at our 2016 Undergraduate Research and Creative Practice Conference. 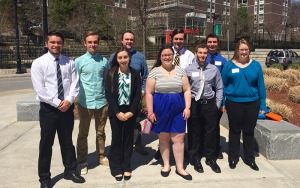 Other things our students are up to: 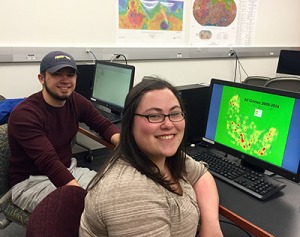 Kayla and Sam assist our own Dr. Jane Huang on the community revitalization project Reimagine North of Main. They study the neighborhood properties through mapping and analysis using GIS. 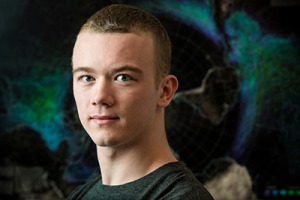 Henry Mros is a recent Fitchburg State Geographic Science and Technology graduate who is now working toward a master's in Geographic Information Sciences at Clark University.

Henry returned to campus in 2016 to deliver a talk, titled “GIS After Undergrad,” where he spoke to current majors about his academic experiences in grad school and shared examples of his post-undergraduate work. 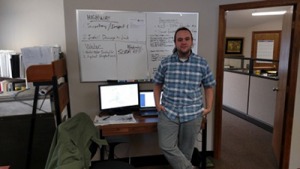 Robin works closely with the DPW superintendent and the town engineer to produce digital maps of the town's infrastructure while also inspecting infrastructure in the field and creating mobile maps that can be accessed via tablets and devices. 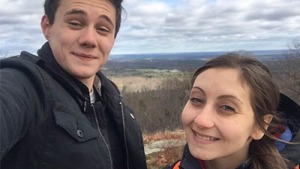 Laura and Tristan conduct GIS Inventorying of farmland in the region while monitoring properties and documenting violations to Conservation Restrictions using GPS and GIS. 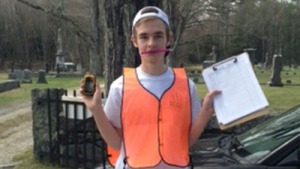 Tyler conducts traffic counts in 21 communities across the Montachusett region, surveys for the Heart Healthy Trail Project in several local communities, and studies walkability for the town of Lancaster.