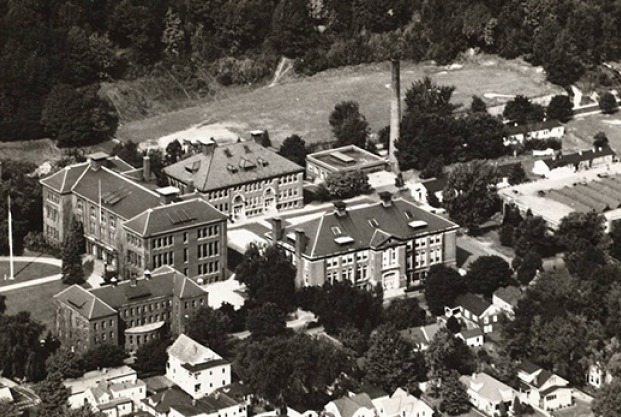 When Fitchburg State was established in 1894, it was known as the State Normal School in Fitchburg, and the sole curriculum was a two-year teacher-training program for women. There was no campus then, just a temporary quarters set up in an old high school building on Academy Street operated by Principal John G. Thompson and a teaching staff of three.

With 46 participants that first year, the program was seen as an overnight success and it became obvious that expansion was necessary. In 1896, the State Normal School in Fitchburg became a single building atop a rural hill that remains operational even today, Thompson Hall.

This early growth is representative of Fitchburg State on the whole: always adapting to meet the needs of an evolving world. So when the students needed a place on campus where they could “observe and practice” their educational pursuit, Edgerly Hall became the next building on campus in 1901. It was an immediate trendsetter for education programs nationwide. In 1910, it became one of the first junior high schools in the United States, and in 1911, it initiated the first-ever practical arts teacher-training course for men.

The 1920s saw the expansion of student life programs, giving rise to the literary society, as well as the debating council, glee club, and drama club. Athletics were broadened beyond basketball to include hiking, crew, tennis, football, and bowling.

Additional land was purchased in support of these activities, which left the college well positioned to meet the major academic changes of the next decade.

In 1930, the State Normal School was authorized to offer a bachelor's degree in practical arts, and in 1932, when the name was officially changed to the State Teachers College at Fitchburg, four-year degrees were offered in all areas of education.

While summer courses were first offered in 1915, under the support of the State Division of University Extension, the college was able to establish actual continuing education courses through graduate programs by 1935, and offered evening courses by 1954.

The college expanded its mission in 1960 by diversifying its programs to include degrees in disciplines other than education. It also changed its name to the State College at Fitchburg for five years before becoming Fitchburg State College in 1965. It went by this name for the next 45 years, as it grew to offer 49 undergraduate degree programs in 18 academic departments, 20 master’s degree programs, five certificate of advanced graduate study programs, and seven graduate certificate programs.

In 2010, the governor signed legislation that established a state university system in Massachusetts, and the institution’s current name, Fitchburg State University, was enacted. Today, enrollment consists of nearly 8,000 students, between undergraduate and graduate populations, and the campus has come a long way from its humble origin in the old building on Academy Street. It offers 42 buildings spread across 60 acres and has become the educational center for the Montachusett region.

Since 1894, Fitchburg State has been proud to serve the educational needs of its students, and with its current offering of traditional and non-traditional programs, it will humbly continue serving its student population for generations to come.