Our patrol officers also take part in community-policing events throughout the year as well as in several university programs and events.

Our police officers are fully trained, licensed, and armed as Special State Police Officers under Massachusetts General Law c.22c, 63. Officers possess full police powers and are responsible for the prevention of crime, the detection and apprehension of offenders, the preservation of public peace, and the enforcement of all criminal laws and state statues as well as compliance with the policies and regulations of the University.

All Officers are trained and attended one of following police academies: 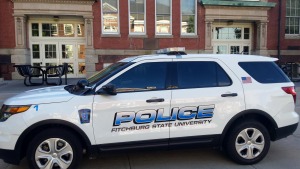 ​The Fitchburg State University Police Department has several Mountain Bikes for use by patrol officers. 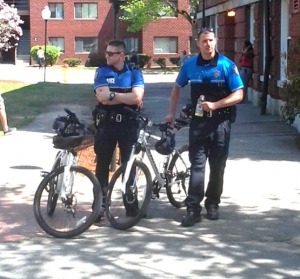 As with any other piece of police equipment, the officers must be trained in their use. Bike patrol officers must pass a State Certified police program such as COBWEB (Cops On Bikes With Education for Bicyclists) that leads to certification as a member of a bike patrol squad. Patrolling on a bike gives the officer a great deal of mobility and enables the officer to quickly and efficiently patrol and respond to areas of campus that are inaccessible to patrol vehicles but too large for traditional foot patrols. Some added advantages of the Mountain Bikes are greater interaction between the officers and the community and setting an example for younger children on the importance of bicycle safety.

The Fitchburg State University Police Department also utilizes foot patrol, either as a stand-alone patrol or part of a cruiser officer’s shift. Officers can be seen out walking and interacting with the University Community. This is both a visible crime deterrent and a way for officers to know more of what is happening in and around the university community.