The smoke stack is a metal, double-walled steel stack that rises 250 feet above the 6-foot concrete base on which it sits.
The little marker lights at the top are 3 feet tall and 1 foot wide.
The stack needs to be this tall to comply with the Department of Environmental Protection Regulations, which state the exhaust opening can be no lower than 25 feet above the closest landmark (the hill). 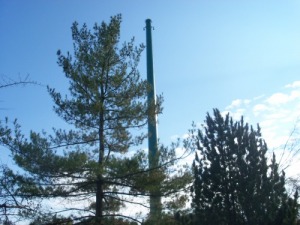 Where Did That Name Come From?