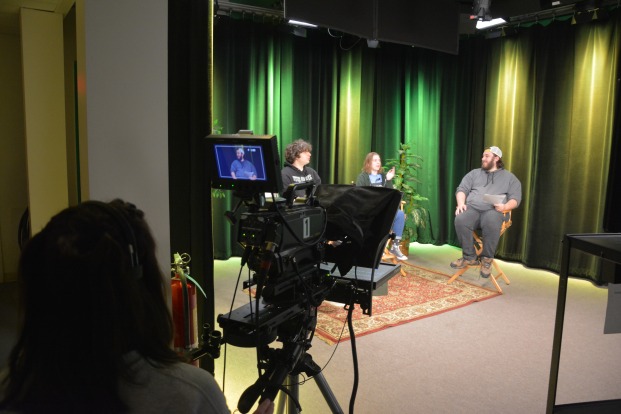 An enduring partnership between Fitchburg State University and Fitchburg Access Television is creating learning opportunities for students and supporting community service for an important local resource.

For the past several years, FATV has hosted the university’s multi-camera television production course, wherein students leave the main campus and head for the station’s Kimball Street headquarters.

“Being active is a great way to learn,” said Professor Kevin McCarthy of the university’s Communications Media Department, who taught the course for the second time last fall. While his own professional background has been more focused on documentary film, McCarthy said the overriding principles transcend media forms. “It’s all storytelling,” he said. “There’s the technical side you have to learn, but then there’s the question of, what are you going to do with it?”

FATV Executive Director Nathan Glenny said the collaboration has been beneficial for his organization as well as the university.

“I’m thankful for the strong relationship and continued partnership FATV enjoys with Fitchburg State,” Glenny said. “Education is key to the foundation, but when coupled with hands-on experience within real-life settings, you’re more than likely going to see a well-rounded graduate ready to hit the ground running for a career in the media industry.”

Alyssa Fields, a sophomore from Chelmsford majoring in communications media with a concentration in film/video, said she was grateful to be taking courses in-person after her first-year was compromised by the pandemic. The multi-camera class at FATV built on her first impressions of Fitchburg State as an institution that valued hands-on learning.

“Within the first week or two we were already in the studio, moving the cameras around,” she said. “We were learning about being on a set, and being able to adjust on the fly.”

Beyond her class time in the studios on Kimball Street, Fields also embraced the course requirement of volunteering additional time with FATV.

“The community service gave me exposure to a variety of different styles,” she said, from talk shows to political debates.

Fields cited the patience and encouragement of FATV Education Coordinator Jarrod Roberts, himself a 2018 graduate of Fitchburg State, for contributing to the positive experience of the class. “Jarrod always made me feel comfortable in the studio and allowed it to be very hands-on,” she said. “He’s always very receptive to the students.”

Fields’ collaboration with FATV extended beyond the semester; she joined the station as a part-time employee this spring.

Moritz Vetter hails from Germany and is studying at Fitchburg State this year as part of an exchange program with Stuttgart Media University. Vetter said there is nothing comparable to community access television in Germany, so the opportunity to learn and create with state of the art equipment was eye-opening.

“I had never considered myself a TV person, but I really enjoyed it,” he said, noting his ambitions gravitate toward film production.

As an international student, Vetter said the community service component helped increase his understanding of the U.S. through projects like covering football games, including running the instant-replay camera. “I knew the basic rules (of football), but I got the hang of it after the first quarter,” he said.

Vetter lent his own athletic skills to Fitchburg State, playing on the Falcons’ men’s soccer team in the fall. That was also a treat, he said, as German universities don’t typically offer scholastic athletics.

Vetter will be studying in the U.S. until May, and looks forward to traveling in addition to completing his classes at Fitchburg State this semester.

The community service aspect of the class was part of its composition when the course was developed several years ago by Professor Ann Mrvica, now retired. For McCarthy, that collaboration is key to the success of the class.

“Collaborating with FATV provides students with an experience working in a broadcast environment,” said McCarthy, noting many students intend to pursue career paths in the multi-camera arena. “The course is an intersection of technical knowledge and storytelling, and connecting with the community. That’s something I don’t always get to do on-campus.”

Glenny agreed the collaboration creates meaningful opportunities for all involved.

“As enrolled students, they have access to an 1,100-square-foot studio and its control room, editing suites and equipment for on-location recording to utilize for their class projects,” Glenny said. “In addition, FATV is highly engaged with the community through broadcasts of studio talk shows, local events and sports, which in turn allows the students to further develop job relevant skills that employers actively seek. This collaboration with the students has created opportunities for our station to cover more in the community and with dynamic coverage through multiple camera angles and higher production values.”

The multi-camera television course will be offered again this fall.