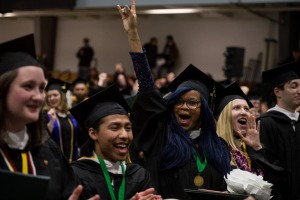 President Richard S. Lapidus highlighted three of the graduating students in his address, who embodied the university's core values including perseverance and dedication. 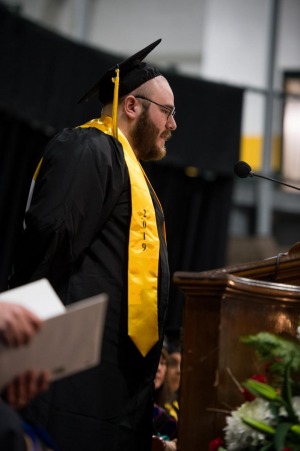 Also recognized at the ceremony was valedictorian Nicholas Powell of Gardner, who completed a degree in English Studies with a concentration in professional writing. Powell likened the graduates to the rare blossoms of cacti.

“For some of you, this is the moment you bloom and your little cacti mind finally comes together,” he said. “For others, this is just another stepping stone. For the rest, they fire in all directions and hope for the best. To me, the beauty of your cacti blooming - of watching everything you’ve learned finally come together, to me, is the feeling I chase every time I wake up, and I hope that maybe I’ve convinced you to do the same - even if it may take a lot of work to get there.”

The Graduate Student Leadership Award was presented to Eman Warraich-Gibson of New Jersey, who completed an MBA. Gibson works at the substance use treatment organization Integrity House in New Jersey, where her duties have expanded to include administrative and leadership roles starting in 2013 and she is now involved in strategic planning, oversight, finance, and human resource and development. Gibson completed the university’s accelerated online MBA in nine months. 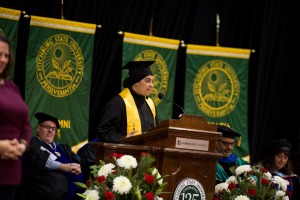 “Like many of my fellow graduates, getting here tonight required some sacrifice,” Gibson said. “My homework often kept me away from my family, even when I was in the house, and I missed other family birthday celebrations. Still, the experience has been rewarding. As a direct result of my participation in the MBA program, I was recently appointed Chief Clinical Officer at my organization, overseeing all 18 of our treatment programs, and with responsibilities that stretch from client care to financial sustainability. The knowledge I gained from the faculty and my classmates is immeasurable and most applicable to the real world.”
Tagged As