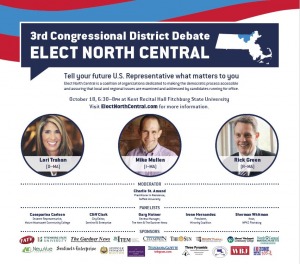 The new Elect North Central Coalition will host a debate for the candidates vying to represent the 3rd Congressional District at 6:30 p.m. on Thursday, Oct. 18 on the Fitchburg State University campus.

Elect North Central is a coalition of organizations dedicated to making the democratic process accessible and assuring that local and regional issues are examined and addressed by candidates running for office.

“The members of Elect North Central represent a broad cross-section of leaders in media, education, community, and business organizations, and was formed to provide residents an opportunity to hear the candidates on issues affecting them and the region,” said North Central Massachusetts Chamber of Commerce President Roy Nascimento, the chair of Elect North Central. “The coalition members plan to continue collaborating on projects that will engage candidates and voters, and provide a platform for the voices of our region to be heard.”

Charles St. Amand, practitioner in residence in the Communication and Journalism Department at Suffolk University, will moderate the debate.

The organizers will also solicit questions from the public in advance for possible inclusion in the debate. Questions may submitted online at the Elect North Central website.

For more information, or to submit a question, visit the Elect North Central website.