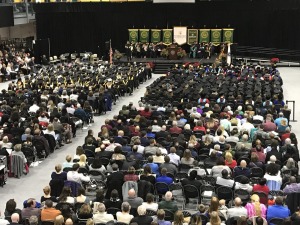 Graduate and undergraduate degrees were conferred for students who spanned the United States and across the globe.

Quinn E. Staley of West Wareham, who completed a degree in communications media, delivered the valedictory address, while Carolyn Perla of Leominster, completing a Master of Business Administration degree, spoke as the recipient of the Graduate Student Leadership Award.

In his commencement address, University President Richard S. Lapidus saluted the graduates on their achievements, singling out three students who embody the institutional spirit.

The ceremony can be viewed online via Fitchburg Access Television.