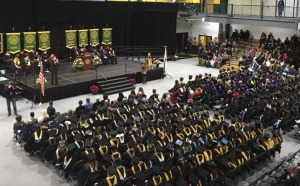 University President Richard S. Lapidus delivered the commencement address, in which he highlighted members of the graduating class, including:

The ceremony also included the recognition of Alexander Steacy of Worcester as the undergraduate valedictorian. Steacy earned a perfect 4.0 grade point average studying biology with a concentration in health sciences.

Also honored was Ranee Maree Wright of Appleton, Wis., who received the Graduate Student Leadership Award in recognition of her work toward her Master of Science in Forensic Nursing. Wright works as a forensic nurse examiner in her home state.

In all, the University conferred nearly 400 undergraduate and graduate degrees this December.

The ceremony was streamed live on Fitchburg Access Television and will be available for viewing on demand on their website.

View an online gallery of photos from the celebration on our Facebook page.