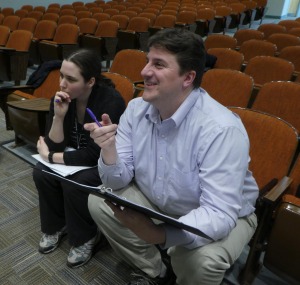 A staged reading of a new play, “Shadows in the Cave,” written by Fitchburg State alumna Samantha deManbey will be presented at 7:30 p.m. Saturday, March 23 at Kent Recital Hall in the Conlon Fine Arts Building, 367 North St. Admission is free (with a suggested donation of $3 to $10) and open to the public. The staged reading will be followed by a talk back session with the playwright.

This is the second of four new plays written by Fitchburg State alumni that will be presented this spring. A staged reading is a presentation of a play in which actors read from a script, but have rehearsed the scenes to help the audience imagine what the play would look like in a full production.  This series of staged readings will be presented by The Forge Theater Lab, founded by Fitchburg State Professor Kelly Morgan and several university alumni with a mission to develop new works. Learn more on their website.

“Shadows in the Cave” is about a student who is inspired by a charismatic teacher to lead a rebellion against his high school’s standardized testing. At first, his protests are successful, but as pressures mount from the administration and his own family, he finds himself increasingly isolated from his teacher, his friends, and his own sense of reality.

“The play deals with the issue of testing, but also asks larger questions about the value of education in our society and how far someone should go to follow their principles,” said deManbey, the playwright who graduated from Fitchburg State in 2012 and later premiered her play “Fausted” at the 2015 Edinburgh Fringe Festival.