Students to discuss study abroad experiences on May 1 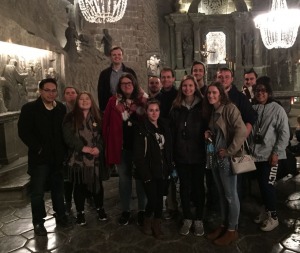 Fitchburg State University students who spent their spring break in Europe for a political science class will discuss their experiences at a public forum Wednesday, May 1 in Miller Hall, 230 Highland Ave. The evening will begin with dinner at 6 p.m. followed by the students’ presentation from 7 to 8:30 p.m.

The students were part of Professor Joshua Spero’s political science class “Europe Today.” In March they visited the Netherlands, Belgium, Germany, and Poland.

“Our students will present their transformative experiences for our campus and greater Fitchburg community from their journey to the ‘Heart of Europe’ in Germany, where they worked closely with their European counterparts at our partnership University in Kleve, Germany (Rhine-Waal University), traveling with them to Amsterdam and the International Court of Justice and the seat of the European Union in Brussels, Belgium, and then journeying to Kraków, Poland, a mystical city with a challenging history, where they visited Oskar Schindler’s Factory and Auschwitz-Birkenau Concentration Camp & Memorial,” Spero said.

Students in the course have been studying the roots of contemporary Europe, particularly the post-Communist era with the fall of the Berlin Wall, collapse of the Soviet Union, re-emergence of democracy in Central-East Europe, and subsequent challenges post-9/11.