Ramos named one of state's 29 Who Shine 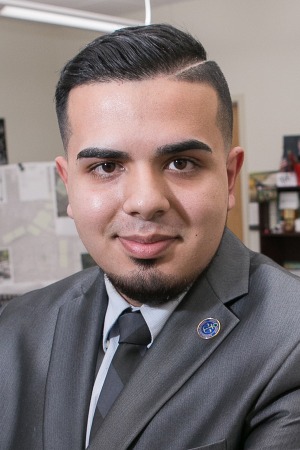 Alexander Ramos Jr. of Leominster will represent Fitchburg State University when the Commonwealth of Massachusetts celebrates "29 Who Shine" in its public higher education system at a ceremony at the Statehouse on Friday, May 3.

Ramos, graduating in May with a degree in political science, has distinguished himself as a standout scholar and leader throughout his time at Fitchburg State, starting as a high school student when he began dual enrollment courses on campus. He immediately impressed university faculty with his talent and intellect, and continued to excel over the rest of his time at the University, being named to the Dean’s List and President’s List in recognition of stellar academic performance. He is a Commonwealth Honors Scholar who represented the University with distinction as a member of its nationally recognized Moot Court team.

Ramos' service to the University community includes welcoming prospective students as a tour guide in the Admissions office and working as an orientation leader to help new students become acclimated to life at Fitchburg State.

His advocacy for fellow students continued with his elected service as representative to the Student Government Association and then as student representative to the University’s Board of Trustees. He was also appointed to represent students on Fitchburg State’s All University Committee (which evaluates changes to curriculum, academic policies and student affairs), where he served as vice chair.

Ramos has also contributed to the strong connections between the University and wider community, interning first in the office of Fitchburg Mayor Stephen L. DiNatale, where he researched proposed legislation and analyzed ordinances passed by the local City Council. He also attended political events and assisted the mayor’s chief of staff with constituent services. In his senior year, Alex interned in the office of U.S. Rep. James P. McGovern, where he assisted with constituent services. In addition, he organized a public affairs program for local access television, providing informed student perspectives on local and national issues of the day.

Ramos will be joined at the 29 Who Shine ceremony Friday by faculty mentor Paul I. Weizer, a member of the University's Economics, History and Political Science Department.

"Dr. Weizer has consistently gone above and beyond in his support of my personal and professional aspirations, from advising me on what classes to take to prepare for law school to counseling me about whatever hardships I encountered," Ramos said. "I am forever indebted to him for his guidance and teachings."