All of the police program students were required to attend the performance and engaged in a panel discussion afterward that focused on the themes explored in the play.

The professional production came recommended by Secretary of Public Safety Daniel Bennett and the state's Municipal Police Training Committee (MPTC), with whom the University has collaborated to create its unique 4+1 police program.

President Lapidus greeted the students at the start of the event, thanking Secretary Bennett and MPTC Executive Director Dan Zivkovich for bringing the opportunity to campus. 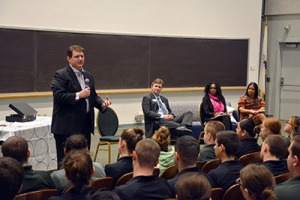 Also addressing students was Gary Gregory, who founded the Every Great Reason Foundation in memory of his sister, Ellen, who was killed by her husband. Gregory told the students the responsibility they carried as future police officers to be enlightened about the insidiousness of domestic violence and to be vigilant for its signs.

Hynes said the play was an accurate representation of domestic violence and encouraged the students to speak up if they have concerns in their own relationships or in those they know.

"We can't give up on these folks," Hynes said. “Please consider yourself enlightened bystanders.”

Rwaramba said 85 percent of the people she supports in her work with the district attorney's office are victims of domestic violence. "Be patient. Hear them out," she said. "Try to meet them where they are."