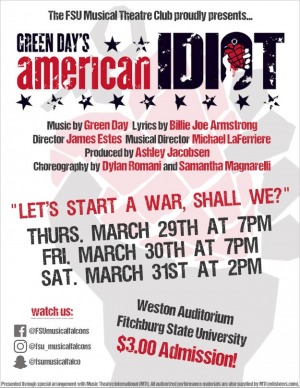 The Tony-winning musical is based on Green Day’s Grammy-winning album from 2004. Like the album, the musical’s main characters are disillusioned young people coming of age in an era of war and drug abuse.

Fitchburg State student Ashley Jacobsen is the musical theater club’s president and plays the main character, Johnny. Mounting the production has been a lot of work, but also a joyful experience, she said.

“We’re a brand new club and this is our first real musical production,” she said. “We didn’t know if there would be interest, but we found a lot of interest.” 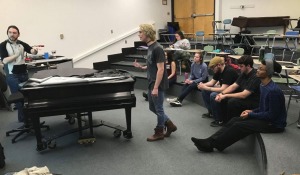 A cast of 22 actors and dancers is joined by a live band – also including students – and has been hard at work on bringing the musical to life since January. Many of the cast were also part of the university theater program’s musical production “Into the Woods” last year, she said, and mounting this new show has been a great experience.

“It’s the most fun a lot of have had since we got here,” Jacobsen said. “It’s a 90-minute musical, and everyone loves Green Day.”

The musical features hit songs including “Boulevard of Broken Dreams,” “Holiday,” “Wake Me Up When September Ends” and the hard-charging title track.

“The original show was set in 2002, and our production updates it to 2018,” Jacobsen said, adding the themes facing a generation raised in wartime and amid rampant drug abuse are still relevant. “We’re trying to make a statement and not just have it be a rock concert. I think we’re going to be doing (Green Day writer-singer) Billie Joe proud.”