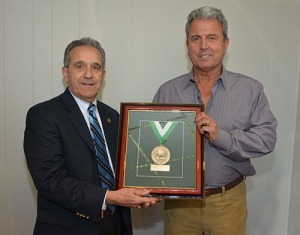 Montuori, owner of Montuori Oil Delivery and several other local businesses, was presented the honor in a surprise ceremony at his Boulder Drive office.

“Mike Montuori’s significant contributions to Fitchburg State have played a tangible role in helping students achieve their goals, allowing them to overcome the financial obstacles placed in their way,” Antonucci said. “He has supported countless other university initiatives, giving of his time and resources. More than most, his actions reflect a commitment to the greater good with no want of recognition for himself.”

Montuori and his wife, Janet, a Fitchburg State alumna, live in Lunenburg.