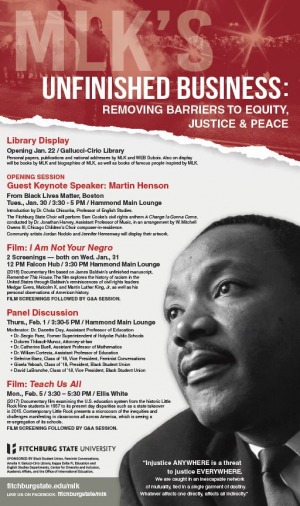 Fitchburg State University will celebrate the life and legacy of Dr. Martin Luther King Jr. with a series of events designed to enlighten and inspire the campus and wider community. All of the events in the series, entitled “MLK’s Unfinished Business: Removing Barriers to Equity, Justice and Peace,” will be held in Hammond Hall at 160 Pearl St., and admission is free and open to the public.

The guest keynote address will be given at 3:30 p.m. Tuesday, Jan. 30 by Martin Henson of Black Lives Matter Boston. Henson will speak in the main lounge at Hammond Hall. His remarks will be preceded by a performance of Sam Cooke’s civil rights anthem “A Change is Gonna Come” by the Fitchburg State choirs.

On Wednesday, Jan. 31, the acclaimed film “I Am Not Your Negro” will be screened twice – at noon in the Falcon Hub and at 3:30 p.m. in the main lounge. The documentary is directed by Raoul Peck and based on James Baldwin’s unfinished manuscript, Remember This House. Narrated by actor Samuel L. Jackson, the film explores the history of racism in the United States through Baldwin’s reminiscences of civil rights leaders Medgar Evers, Malcolm X, and Martin Luther King, Jr, as well as his personal observations of American history. Nominated for best documentary feature at the 89th Academy Awards. Both of the screenings will be followed by question-and-answer discussions.

There will screening of the documentary film “Teach Us All” at 3:30 p.m. Monday, Feb. 5 at Ellis White Lecture Hall. Directed by Sonia Lowman, the 2017 film examines the U.S. education system from the historic Little Rock Nine students in 1957 to present day disparities such as a state takeover in January 2015. Contemporary Little Rock presents a microcosm of the inequities and challenges manifesting in classrooms all across America, which is seeing a re-segregation of its schools. The screening will be followed by a question-and-answer session.

Throughout the observations, the Amelia V. Gallucci-Cirio Library will feature displays of personal letters, notes, papers, and national addresses by King and W.E.B. DuBois, along with books by and about King’s legacy.

The series is sponsored by the Black Student Union, Feminist Conversations, Kappa Delta Pi, the Amelia V. Gallucci-Cirio Library, the Education and English Departments, the Center for Diversity and Inclusiveness, the Office of International Education and the Office of Academic Affairs.