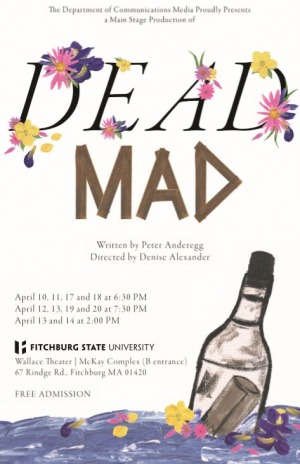 A new play that explores how we respond when we’re suddenly forced to wake up, take stock, and chart a new course is Fitchburg State University’s main stage theater production this April. “Dead Mad,” written by Peter Anderegg and directed by Denise Alexander, will be performed at the Wallace Theatre for the Performing Arts in the McKay Complex, 67 Rindge Road, from April 10-20.

The play tells the story of Jason Brooks, who must write an obituary to avoid being haunted by his mother after she escapes Charon the Ferryman in Hades. In so doing, he confronts the fact that he knows almost nothing about her that is 100 percent true. The play uses a non-linear structure to whipsaw between time periods as characters try to figure out what’s real and what’s imaginary.

Admission is free but donations will be accepted at the door.