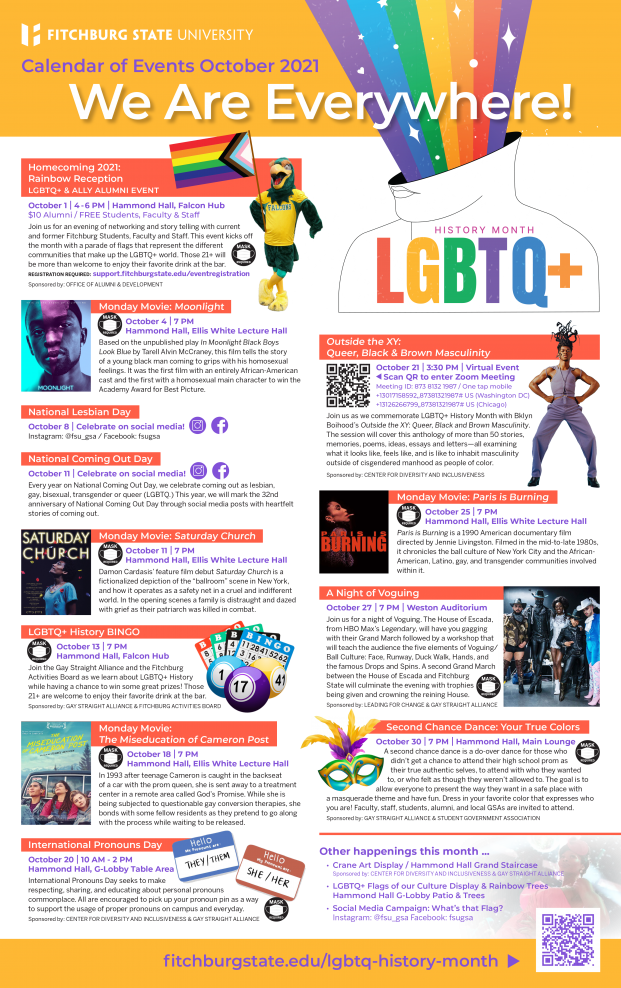 Fitchburg State University celebrates LGTBQ+ History Month in October with a series of gatherings, film screenings and participatory events developed around the theme “We Are Here.”

Registration is required for some events. As a precaution against COVID-19, face coverings are required indoors on campus buildings, and visitors must sign attestation forms indicating they are asymptomatic and have not been recently exposed.

The programs begin with the Rainbow Reception: LGBTQ+ and Ally Alumni Event, presented in collaboration with the university’s Homecoming 2021 events. This program, an evening of networking and storytelling with current and former university students, faculty, and staff, will run from 4 to 6 p.m. Friday, Oct. 1 in the Falcon Hub at Hammond Hall. There will also be a parade of flags representing the different populations that comprise the LGTBQ+ world. Registration is required for this event. This event is sponsored by Fitchburg State’s Office of Alumni and Development.

Film screenings will be held each Monday of the month. At 7 p.m. Monday, Oct. 4 in Ellis White Lecture Hall at Hammond Hall, there will be a screening of the Oscar-winning film “Moonlight.” Based on the unpublished play “In Moonlight Black Boys Look Blue” by Tarell Alvin McCraney, the film tells the story of a young black man coming to grips with his homosexual feelings. It was the first film with an entirely African-American cast and the first with a homosexual main character to win the Academy Award for best picture. Admission is free and open to the public, though face coverings are required indoors.

The events turn to social media for National Lesbian Day on Friday, Oct. 8 and National Coming Out Day on Monday, Oct. 11. Follow the university’s Gay Straight Alliance (GSA) Instagram and Twitter accounts to join these events, where members of the campus community will share their own stories.

The film series continues at 7 p.m. Monday, Oct. 11, with a screening of “Saturday Church” at Ellis White Lecture Hall in Hammond Hall. Damon Cardasis’ feature debut is a fictionalized depiction of the “ballroom” scene in New York, and how it operates as a safety net in a cruel and indifferent world. In the opening scenes a family is distraught and dazed with grief as their patriarch was killed in combat. Admission is free and open to the public, though face coverings are required indoors.

The GSA will host LGBTQ+ History Bingo at 7 p.m. Wednesday, Oct. 13 in the Falcon Hub and Hammond Hall. Participants will learn LGBTQ+ history while having a chance to win prizes.

The film series continues at 7 p.m. Monday, Oct. 18 with “The Miseducation of Cameron Post” in Ellis White Lecture Hall in Hammond Hall. In 1993, after teenage Cameron is caught in the backseat of a car with the prom queen, she is sent away to a treatment center in a remote area called God’s Promise. While she is being subjected to questionable gay conversion therapies, she bonds with some fellow residents as they pretend to go along with the process while waiting to be released. The screening is free and open to the public, though face coverings are required indoors.

The GSA and the Center for Diversity and Inclusiveness hosts International Pronouns Day from 10 a.m. to 2 p.m. Wednesday, Oct. 20 in the G-Lobby of Hammond Hall. International Pronouns Day seeks to make respecting, sharing, and educating about personal pronouns commonplace. All are encouraged to pick up a pronoun pin as a way to support the usage of proper pronouns on campus and everyday.

There will be a virtual event at 3:30 p.m. Thursday, Oct. 21 with a discussion of Bklyn Boihood’s “Outside the XY: Queer, Black and Brown Masculinity.” This session, sponsored by the Center for Diversity and Inclusiveness, will cover Outside the XY, an anthology of more than 50 stories, memories, poems, ideas, essays and letters that examine what it looks like, feels like, and is like to inhabit masculinity outside of cisgendered manhood as people of color in the world. Join the discussion at https://fitchburgstate.zoom.us/j/87381321987.

The Monday night film series continues at 7 p.m. Monday, Oct. 25 with the acclaimed documentary “Paris is Burning” (1990). Directed by Jennie Livingston, the documentary was filmed in the mid to late 1980s and chronicles the ball culture of New York City and the African-American, Latino, gay, and transgender communities involved in it. Admission is free and open to the public, though face coverings are required indoors.

The events continue with “A Night of Voguing” at 7 p.m. Wednesday, Oct. 27 in Weston Auditorium. The House of Escada, from HBO Max’s Legendary, will start off the evening with their Grand March followed by a workshop that will teach the audience the five elements of voguing and ball culture: face, runway, duck walk, hands, and the famous drops and spins. A second Grand March between the House of Escada and Fitchburg State will conclude the evening with trophies and crowns bestowed. This event, sponsored by GSA and the university’s Leading for Change group, is free and open to the public, though face coverings are required indoors.

The university will host a Second Chance Dance at 7 p.m. Saturday, Oct. 30 in the main lounge at Hammond Hall. A second chance dance is a do-over dance for those who didn’t get a chance to attend their high school prom as their true authentic selves, to attend with who they wanted to, or who felt as though they weren’t allowed to. The goal is to allow everyone to present the way they want in a safe place with a masquerade theme and have fun. All are encouraged to dress in their favorite color that expresses who they are. Faculty, staff, students, alumni, and local GSAs are invited to attend. This program is sponsored by the GSA and the Student Government Association.