Legacy of War on Terror explored at May 1 discussion 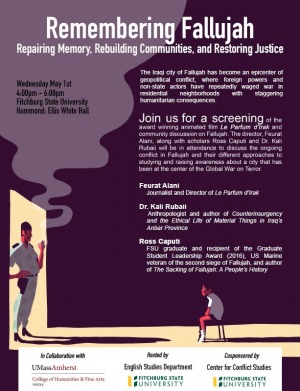 The legacy of the War on Terror will be explored with talks and film screenings at Fitchburg State University on Wednesday, May 1. “Remembering Fallujah: Repairing Memory, Rebuilding Communities and Restoring Justice” will be held at 4 p.m. May 1 at Ellis White Lecture Hall in Hammond Hall, 160 Pearl St. Admission is free and open to the public.

The Iraqi city of Fallujah has become an epicenter of geopolitical conflict, where foreign powers and non-state actors have repeatedly waged war in residential neighborhoods with staggering humanitarian consequences. The impact of this event will be explored with a screening of the award-winning animated film Le Parfum d’Irak and a community discussion of the aftermath of the siege of Fallujah.

Panelists will include Le Parfum d’Irak director Feurat Alani; anthropologist Kali Rubaii, author of “Counterinsurgency and the Ethical Life of Material Things in Iraq’s Anbar Province;” and U.S. Marine veteran and scholar Ross Caputi, who earned the Graduate Student Leadership Award at Fitchburg State when he completed his master’s degree in 2016. Caputi, now in a PhD program, is author of the book The Sacking of Fallujah: A People’s History.

The program is hosted by the English Studies Department and co-sponsored by the Center for Conflict Studies. It is presented in collaboration with the College of Humanities & Fine Arts at UMass Amherst.