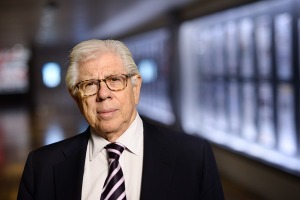 Few journalists in America have had the impact on history and their craft as legendary investigative reporter Carl Bernstein. From uncovering the Watergate scandal to writing about national and international affairs for more than 40 years, Bernstein’s books, reporting and commentary have revealed the inner-workings of government and politics, and told the hidden stories of Washington and its leaders. Drawing parallels between the past and the events of today, Bernstein consistently speaks truth to power, sharing rich historical context and captivating stories from his legendary career.

On Sunday, Oct. 6, Bernstein will address the topic of fake news in the current media landscape in his remarks and interview with WGBH Senior Political Reporter Adam Reilly at The Bull Run Restaurant in Shirley. The event is part of the ongoing Bull Run Speaker Series. Doors open for Sunday brunch and seating at 10 a.m. The speaking program will begin at noon. Tickets and information are available on the Bull Run website.

Bernstein’s talk is sponsored by Fitchburg State University, which is observing its 125th anniversary in the 2019-20 academic year.

The university, including its Communications Media and English Studies departments, is committed to helping students discern what is true, misleading or false in all forms of published or broadcast communications. Its multi-disciplinary curriculum brings together students from diverse majors to learn about the importance of ethics in public relations, reporting and media production. New courses such as News Reporting and Writing and Social Media Campaigns focus on ways to identify fake news and to produce quality content that adheres to only the highest standards of journalism and marketing. Faculty serve as coaches and mentors, helping students to understand the influence and power of communications online and in print and to protect these resources as a public trust.

The event is part of Fitchburg State University’s 125th anniversary celebration. Throughout the 2019-20 academic year, the University will be holding programs celebrating the breadth and diversity of the institution and the vitality of its campus community. Learn more on the 125th Anniversary page.

Doors open for Sunday brunch and seating at 10 a.m. The speaking program will begin at noon.

The program will take place in the Sawtelle Room at The Bull Run Restaurant, located at 215 Great Road in Shirley.

A political analyst for CNN and a contributing editor at Vanity Fair, Carl Bernstein is currently at work on several multi-media projects, including a memoir about his earliest days in journalism during the Kennedy era and a dramatic TV series about the U.S. Congress for HBO. He began his career at age 16 as a copyboy for The Washington Evening Star. In the early 1970s, Bernstein and his partner, Bob Woodward, captured international attention when they broke the Watergate story for The Washington Post. Woodward and Bernstein’s investigative reporting led to the resignation of President Richard Nixon, set new standards for journalism and won the Pulitzer Prize. The two went on to write two classic best-sellers: All the President’s Men (also a movie starring Robert Redford and Dustin Hoffman) about their coverage of Watergate and The Final Days, chronicling the end of the Nixon presidency. Bernstein’s other best-selling books include Loyalties: a Son’s Memoir, about his family’s experiences in the McCarthy era, and His Holiness: Pope John Paul II and The History of Our Time, a biography of Pope John Paul II, co-authored with Marco Politi. His most recent book is the national best-seller A Woman in Charge: The Life of Hillary Rodham, acclaimed as the definitive biography of the subject. His articles have appeared in Time, USA Today, Rolling Stone and The New Republic. From 1999-2001, Bernstein served as editor and executive vice president of Voter.com, a pioneering website that Forbes named the best political site on the internet. He has also worked as Washington bureau chief and correspondent for ABC News.

Adam Reilly is Senior Political Reporter for WGBH Boston. Prior to coming to WGBH, he covered media and politics for The Boston Phoenix. He is a graduate of Carleton College and The Harvard Divinity School.

WGBH Boston is the media sponsor.

For tickets and information, please visit the Bull Run website.