Hockey teams to help "Stick it to Alzheimer's" in February 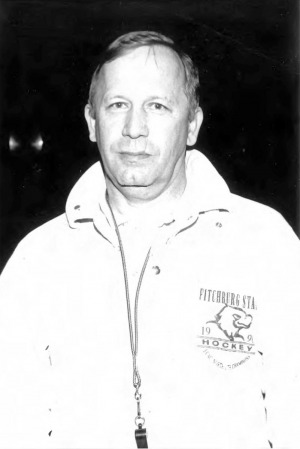 The “Stick it to Alzheimer’s Open Skate” will be held at 7:30 p.m. Friday, Feb. 9, where monetary donations will be accepted at the door for Terry McNabb’s Team, participating in the Walk to End Alzheimer’s. Donations of non-perishable food items and toiletries for the Townsend Ecumenical Outreach will also be accepted Friday night, as McNabb was also a supporter of that organization. Skates can be rented at the Civic Center during the event, or skaters may bring their own.

The events continue Saturday, Feb. 10 with Terry & Bette McNabb’s Game, in memory of the late coach and youth hockey advocate. Fitchburg State will take on Framingham State at 5 p.m., with the players clad in purple jerseys to raise Alzheimer’s awareness. The game will be followed by high school action between North Middlesex Regional and Lunenburg.

Tickets, allowing visitors to see both games, are $10 apiece, and all proceeds will go to Terry McNabb’s Team.

“Terry was a great coach, father, and leader in the community, but mostly he was a friend to every little kid who laced up their skates,” said Fitchburg State Falcons Hockey Coach Dean Fuller. “He will always be a part of Falcon hockey in every practice or game we play.”

Kathy (McNabb) Hatch, the late coach’s daughter, said the fundraiser was a way for members of her family to honor their father and help other families enduring the challenges of Alzheimer’s Disease.

“Fitchburg State was a big part of my father’s life,” she said. “He was very happy when working with the hockey team and recruiting players. It was a special part of his life.”

His commitment to youth hockey – for boys and girls – was also an essential part of his life.

“There were skates all over the house when we were growing up,” Hatch recalled. “Anyone who would come to the store who wanted to learn to skate, he would find them skates. My father would make sure of it.”

Terry McNabb died in 2016 and was engaged in community service throughout his life. In addition to his years as an assistant coach for the Fitchburg State Falcons, he was a longtime member and one-time president of the Nashoba Community Hospital Board of Trustees, was a founding member of the PAT Youth Hockey Program, and received the Friends of the Townsend Seniors William E. May Endowment Award in 2009, recognizing his service to his town. He spent five decades running the family business, McNabb Pharmacy, in Townsend Center, and the family business is still running, owned and operated by Terry’s daughter, Karen McNabb-Noon.

Tickets to the game may be purchased in advance at McNabb Pharmacy at 233 Main St., Townsend, or by contacting the alumni office at Fitchburg State at 978.665.4555 or alumni@fitchburgstate.edu.

The Alzheimer’s Association Walk to End Alzheimer’s is the world’s largest event to raise awareness and funds for Alzheimer’s care, support and research, inviting participants of all ages and abilities to join the fight against the disease.