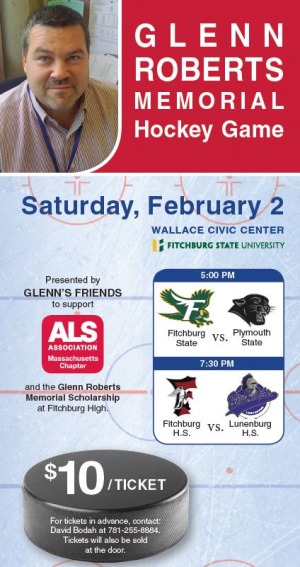 Glenn Roberts died in 2013 at age 49 after a brave fight against ALS, also known as Lou Gehrig’s Disease.  Roberts, who worked at Mount Wachusett Community College for more than 20 years, completed a master’s degree in counseling psychology at Fitchburg State in 1992. His wife, Debra Roberts, is a triple Falcon, completing degrees at Fitchburg State in 1990, 1994 and 2003.

Tickets for the game are $10 and will grant admission to the Fitchburg State and Plymouth State game at 5 p.m. as well as the Fitchburg High School versus Lunenburg High School game at 7:30 p.m. Tickets may be purchased in advance by contacting David Bodah at 781.255.8884. Tickets will also be available at the door. Entry will be free to students with a OneCard.

“Glenn’s Friends” will also host a free open skate from 7:30 to 8:30 p.m. Friday, Feb. 1 at the Wallace Civic Center, sponsored by Fidelity Bank. Donations for the ALS Association and memorial scholarship will also be accepted at the open skate. Skaters may bring their own skates or rent skates for $6 a pair. All proceeds from skate rentals will be donated to the cause.