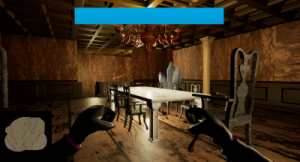 On a recent weekday morning, groups of students presented rough sketches of video games they had designed over the past two weeks. Only three of the four games being shown off on this morning would be greenlit for development over the coming semester.

These students are seniors, completing the capstone program in their game design majors. Fitchburg State hosts the only baccalaureate game design program in any public institution in Massachusetts, and as of this semester the capstone is located in the ideaLab in the Main Street Theater Block downtown.

In the early days of the semester, these 22 students were tasked with developing pitches for a game. Working in teams, they came up with prototypes and early animation to demonstrate the games and their objectives. On this particular morning, they presented the work “Shark Tank” style to game design faculty members Jeff Warmouth, Jon Amakawa and Les Nelken, along with theater faculty member Kelly Morgan.

The highest marks went to a game currently code-named “Project Magus,” described by team member A.J. Marraffa of Salem as a “stealth puzzle, with magic powers.”

The games in progress were developed with much greater independence than in a standard classroom, as the capstone course is run off-campus with comparatively minimal faculty oversight. The atmosphere was conducive to a productive class, several students said.

“In one week, we accomplished so much,” said Austin Dulong of Haverhill, another member of the Project Magus team. Other members of the team include Micah Souza of New Britain, Conn., Thomas Howley of Amesbury and Jeff Douglas of Salisbury.

The other games greenlit include what’s currently known as “Dab Revo,” where the player assumes the role of a student doing the “dab” dance in their school hallway while trying to avoid being spotted by the principal or other adults who pass by. The more dabs and combinations thereof the player can execute, the higher the score.

The game has humor, but as team member Jules Stackhouse of Southboro explained, there’s some heart behind it too.

“The game has undertones of freedom of expression,” Stackhouse said, adding that the finished game will allow players to adjust their wardrobe to personal specifications. Stackhouse and other team members went to a local school to speak to students about their experiences as part of their research for the game. “This game is for them, for a younger audience who want to express themselves,” he said.

Fellow team member Denzel Weatherspoon – who has already started his own game design firm, Dennel Cake – said he will be working on three-dimensional renderings of the “Dab Revo” characters as the project moves forward in its development.

The third game moving forward is “Dark World Burger,” a role-playing game set in a dystopian fast-food universe in which players engage in combat by preparing and launching hamburgers at their assailants.

The games will take shape in the coming 10 weeks and will be ready for unveiling at the end of the semester.