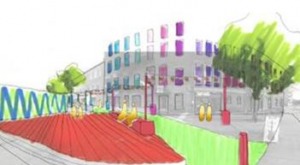 MassDevelopment and the civic crowdfunding platform Patronicity have launched a new Commonwealth Places campaign with the Fitchburg State University Foundation and Reimagine North of Main to activate Mill Street, a remote alleyway in downtown Fitchburg.

The organizations will transform the concrete road into a unique, temporary park using low-cost, flexible design solutions like movable astroturf, planters, and modular decking, which can serve as seating or a music venue. The park will feature murals and other works of public art, and decorative window treatments will be placed on nearby buildings. Organizers will also make available a street cart where vendors can sell their food and goods, enabling entrepreneurs to take advantage of increased foot traffic.

“MassDevelopment looks forward to supporting the Fitchburg State University Foundation and Reimagine North of Main in their efforts to activate Mill Street,” said MassDevelopment President and CEO Lauren Liss. “This project will transform an underutilized alleyway into a destination and entrepreneurial opportunity in downtown Fitchburg, increasing foot traffic for local businesses and adding vibrancy to this important Gateway City.”

If the campaign reaches its crowdfunding goal of $40,000 by June 30 at midnight, the project will win a matching grant with funds from MassDevelopment’s Commonwealth Places program. Learn more and donate to Activate Mill Street on the Patronicity page.

“We are grateful to have the continued support of MassDevelopment in Fitchburg’s downtown,” said Fitchburg Mayor Stephen L. DiNatale. “There are many exciting projects in the pipeline—such as the Theater Block, City Hall, the Fitchburg Arts Community, and the Library Redevelopment—but these projects take time. Placemaking projects like Activate Mill Street are a great way to build some low-cost, short-term wins towards that long-term change, and continue the momentum that is pushing Fitchburg, and its downtown, in a positive direction as a vibrant center for arts and culture.”

Commonwealth Places is a collaborative initiative from MassDevelopment and Patronicity that leverages public support for placemaking projects through crowdfunding and a matching grant from MassDevelopment. The program engages residents in the development of strategic projects in their towns and cities. In November 2018, MassDevelopment announced $500,000 in funding for the third year of the program, which has supported successful campaigns across the Commonwealth, from Northampton to Hyannis. Communities, nonprofits, and other entities can learn more about these successful projects, donate to ongoing campaigns, and apply on the MassDevelopment website.

MassDevelopment, the state’s finance and development agency, works with businesses, nonprofits, financial institutions, and communities to stimulate economic growth across the Commonwealth. During FY2018, MassDevelopment financed or managed 384 projects generating investment of more than $4.1 billion in the Massachusetts economy. These projects are estimated to create or support 10,994 jobs and build or rehabilitate 830 housing units.