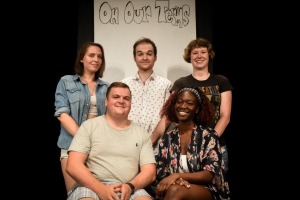 The Forge Theater Lab at Fitchburg State University is kicking off its second season with a production of “On Our Terms,” a new play written by Fitchburg State alumna Mary Darling. The play runs September 6-14 in the Wallace Theater for the Performing Arts in the McKay Building at 67 Rindge Road.

In this absurd, provocative comedy, two people negotiate a one-year relationship contract before their first date, to ensure that all of their expectations are met. As they make their way through the transaction, they share stories of previous failed relationships, in hopes that maybe this one will last.Playwright Mary Darling, who grew up in Worcester and now lives in Southbridge, says she is “interested in how we perceive and talk about our versions of past relationships.” Instead of writing a realistic play about modern dating, she sees a play as a chance to use humor and satire to imagine life would be like if romance started with formal negotiations: “What if we could review their resume, call their references, hear their side of what went wrong in the past?”

This production is directed by Noah Dawson of Fitchburg, another Fitchburg State graduate who is also a drama teacher at the Sizer School.

“On Our Terms” is the first event in the second season of The Forge Theater Lab, a group in residence at Fitchburg State that is devoted to developing new plays. More information about The Forge is available on their website.