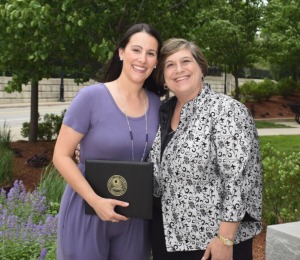 Sara-Maria L. Goguen, a science teacher at Fitchburg’s Goodrich Academy and a two-time alumna of Fitchburg State University, was recently recognized by the University’s Alumni Association with the prestigious Joel D. Miller Award.

The presentation was made at Fitchburg State’s eighth annual Retired Educators Luncheon.

Goguen earned degrees in biology in 2004 and a master’s degree in education in 2009 from Fitchburg State. She has been a teacher at Goodrich Academy since 2012, joining that staff after six years of teaching biology at Fitchburg High School.

“Ms. Goguen is committed to finding the proper support for her students so that their struggles are surmountable,” Goodrich Academy Principal Alexis S. Curry wrote in nominating Goguen for the award. “Ms. Goguen settles for nothing less than success and holds her students to the same standard. She is patient and works tirelessly to ensure that students succeed and graduate. Ms. Goguen is an exemplary teacher but more importantly she is an incredible human being.”

The awards committee also saluted Goguen’s resourcefulness in reaching out to Fitchburg State professors to access the University’s science facilities, coordinating transportation for her students. She also secured a grant for $105,000 from the Massachusetts Life Sciences Center to fund the creation of a lab at Goodrich.

“Simply put, Ms. Goguen is more than just an exemplary teacher,” continued Curry, herself a 1989 Fitchburg State alumna. “She is a consummate professional who exemplifies everything that is right about people and about teaching. She is truly one of a kind.”

The Joel D. Miller Award was established in 1955 to honor the former state senator and member of the Board of Education who is considered one of the three founders of the State Normal School in Fitchburg, as Fitchburg State was originally known. 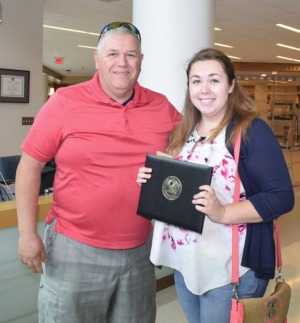 Also recognized at the luncheon was Erin Tetreault ’19 of East Brookfield, who was awarded the Retired Educators Scholarship. Tetreault is studying early childhood education with a minor in literature and maintains a grade point average of 3.85.

Tetreault was recently inducted into Kappa Delta Pi, the international honor society for education. She has already passed her state teaching licensure examinations and hopes to begin her career teaching first and second grade after graduation next year.