Faculty Perspective: Why you don’t need to be French or Catholic to mourn the Notre Dame fire 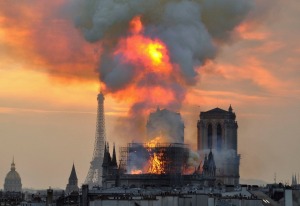 was originally published in the Washington Post on Wednesday, April 17, 2019.

When I read these words on the news, I was in Germany for a research trip. Without conscious thought, I immediately looked up to see how far away I was from Paris. Five and half hours. The urge to jump in my rental car and make the drive was strong. I had no plan or any idea of what I would do when I got there, but the need to see for myself the truth about the damage was overwhelming. Realizing the futility of the trip, I instead turned on the news and watched flames devour the cathedral.

Medievalists all over the world took to social media to express their visceral grief at the sight of the building in flames. Almost anyone in the field, even those who don’t study French culture, is aware of the history located in Notre Dame, in its artifacts and relics, in its stained glass, in its very walls. In a way, spaces such as Notre Dame become the cultural heritage of all of us who study them. It is this heritage — and all too often the shock of losing or almost losing it — that makes us aware of our connection to a premodern past that is already at times difficult to access.

The awareness of Notre Dame’s significance is not, of course, the sole province of academics. It is shared with the approximately 12 million people who visit the cathedral every year, all of whom have memories of the monument, captured in photos with friends and family.

Those images, reposted as the news of the fire spread, serve as reminders of the cathedral as it continues to exist in a multitude of moments and times. Imagery has always been central to the significance of Notre Dame, a building whose awe-inducing form and intricate artistry forged its centuries-long legacy. Shared experiences in the shadow of Notre Dame link modern snapshots to manuscript images like those that medievalists began to post during the fire, such as the “Hours of Étienne Chevalier” from the 15th century, which depicts the cathedral as it was seen through medieval eyes. Such images mingle with the informal snapshots of vacations and business trips to form a lineage of visitors influenced by their experiences in that space, experiences made more real and more significant by the act of sharing them.

Even those yet to share this experience fit into this centuries long lineage: many who have plans to see the cathedral have mental images and wonder what it will be like, not all that unlike the desires of medieval people to pilgrimage, desires sometimes acted on and other times not, but always present.

Paradoxically, what creates the idea of Notre Dame and other similar spaces as sites of shared cultural heritage is precisely the vast array of meanings they hold for so many.

For medievalists, the cathedral’s sheer existence is a primary source of the lived experience of the Middle Ages. An example: while we watched the fire rage, experts began bringing to bear their knowledge of medieval architecture and techniques used for repair across centuries of construction and reconstruction. Hope was kindled through reminders of such events as the shelling of Reims Cathedral in WWI, wherein the masonry vaulting under the roof prevented the complete destruction of the building. It is now indeed believed that the medieval innovation, the flying buttresses, may have saved what remains of the roof and walls. The medieval minds who conceived of this feat of engineering — which also allowed for the brilliance of Notre Dame’s rose windows (which, fortunately, seem to have been saved) — bridged the centuries, reaching forward into our present to save at least part of the cathedral.

For others, Notre Dame represents connections. Like other Gothic cathedrals of its time, Notre Dame has recognizable features of Islamic architecture, the most cited of which is its distinctive pointed arches. This connection speaks to the contact between cultures in the Middle Ages, the shared knowledge achieved both peacefully and through conflict. Notre Dame belongs not just to one tradition, but to many.

Still others find the significance of Notre Dame not in its structure but in what it contains. Many of its relics, including the famous Crown of Thorns, have been saved as firefighters and others formed a human chain into the burning skeleton of the cathedral. Objects such as these that have been venerated across time, regardless of religion or system of belief, become imbued with significance, even for those who do not share the same creed. Faith, especially that which is sustained over time, creates cultural heritage out of objects and spaces, transforming them into something both worthy of study and qualified for protection.

The reaction to the Notre Dame fire is about more than the heritage of one cathedral. It was a reaction to the sudden awareness of the fragility of our premodern heritage, as well as our connection to these peoples of the past and what they still have to tell us.

Certainly much of Notre Dame’s significance lies in its survival and its evolution, from its original construction to its many additions, from the Reformation to the French Revolution, from the cathedral’s decline during centuries of neglect to its renewed fame in the 19th century to efforts across the last 150 years to repair and restore. Human innovation may once again assist in potential preservation and repair, whatever form that may take. The late professor Andrew Tallon laser-scanned all of Notre Dame in 2010, preserving minute measurements of the structure. We go to great lengths to create and preserve our heritage, dedicating careers and sometimes sacrificing lives.

To watch not only the material objects in the cathedral but also such a symbol of staunch endurance (indeed, many are referring to the cathedral as a structure they expected to far outlive them) in imminent danger forces us all to face the fragility of the heritage we look to for guidance and insight into the present and future. The destruction of the ancient city of Palmyra, the burning of the Museu Nacional in Brazil, the historic fire of the library at Alexandria and countless other examples both recent and throughout history — Notre Dame now joins them as a moment that speaks to the beating heart of human identity, potential and loss. By definition, that which has become cultural heritage has meaning that transcends political entities and fabricated boundaries, and, when it’s in jeopardy, we all feel the heat of the flames on our faces.