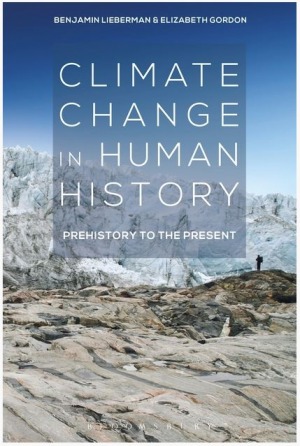 Professors Ben Lieberman (Economics, History and Political Science) and Elizabeth Gordon (Earth and Geographic Sciences) have co-authored a new book about the relationship between human beings and global climate. Climate Change in Human History is being published in January by Bloomsbury Academic, an imprint of Bloomsbury Publishing.

“The book arose out of a team-taught class that brought together our fields of geophysical science and history to focus on a topic of extreme importance,” Lieberman said. “It is invaluable, in my opinion, for Fitchburg State students to have the chance to take these kinds of interdisciplinary courses.”

Gordon agreed. “It not only covers an important topic in the geosciences, but it teaches students how to integrate the methods and evidence from different disciplines to address a critical issue,” she said.

The course was first taught in 2012 but both professors were dissatisfied with the available textbooks on the subject.

“Climate research is ever expanding, and historians have established environmental history as a major field, but we found that the books available to provide an overall guide for students were lacking for a variety of reasons,” Lieberman said.

​So they decided to write one of their own. The new book took shape as sabbatical projects for both professors in 2015 and 2016.

The finished volume provides an up-to-date and concise introduction to the relationship between human beings and climate change throughout history. Spanning hundreds of thousands of years, it illustrates how natural climate variability affected early human societies, and how humans are now able to alter climate drastically within much shorter spans of time. The book explains how climate change has created opportunities for human societies as well as risks and challenges over the centuries. It concludes by outlining the key human role in bringing about accelerating climate change.

Professors Gordon and Lieberman’s co-taught class on climate change and human history will next be offered in the fall of 2018.