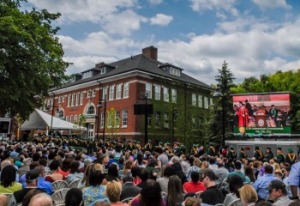 During the Undergraduate Commencement, an honorary doctorate will be conferred to Carol Vittorioso, who recently completed her tenure as chairman of the University’s Board of Trustees. The Robert V. and Jeanne S. Antonucci Student Leadership Award will be presented to graduating senior Nathan Gregoire. And President Robert V. Antonucci will receive the President Emeritus Award.

Also during the ceremony Saturday, the University will hand out its major faculty awards. The Vincent J. Mara Award for Excellence in Teaching will be presented to Benjamin Railton, a member of the English Studies faculty. The Faculty Award for Research and Scholarship will be presented to Jeffrey Warmouth from the Communications Media Department.