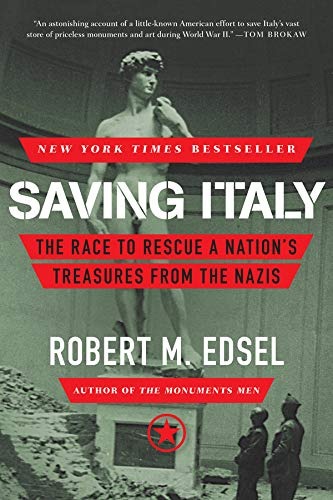 The Center for Italian Culture (CIC) at Fitchburg State University continues its virtual book club in February, with an unforgettable story of epic thievery and political intrigue.

On Thursday, Feb. 11, Professor Teresa Fava Thomas (Economics, History and Political Science) will lead a discussion of the New York Times best-seller Saving Italy: The Race to Rescue a Nation’s Treasures from the Nazis by Robert M. Edsel. The discussion will be held on Google Meet at 3 p.m.

When Hitler’s armies occupied Italy in 1943, they also seized control of mankind’s greatest cultural treasures. As they had done throughout Europe, the Nazis could now plunder the masterpieces of the Renaissance, the treasures of the Vatican, and the antiquities of the Roman Empire. On the eve of the Allied invasion, General Dwight Eisenhower dispatched art scholars Major Deane Keller and Lt. Fred Hartt of the U.S. Monuments Men on the treasure hunt of a lifetime, tracking billions of dollars of missing art, including works by Michelangelo, Donatello, Titian, Caravaggio, and Botticelli.

With the German army retreating up the Italian peninsula, orders came from the highest levels of the Nazi government to transport truckloads of art north across the border into the Reich. Standing in the way was General Karl Wolff, a top-level Nazi officer. As German forces blew up the magnificent bridges of Florence, General Wolff commandeered the great collections of the Uffizi Gallery and Pitti Palace, later risking his life to negotiate a secret Nazi surrender with American spymaster Allen Dulles.

Brilliantly researched and vividly written, Saving Italy brings readers from Milan and the near destruction of The Last Supper to the inner sanctum of the Vatican and behind closed doors with the preeminent Allied and Axis leaders: Roosevelt, Eisenhower, and Churchill; Hitler, Göring, and Himmler.

The CIC’s virtual book club will continue at 3 p.m. Thursday, March 25, when Professor Rala Diakite of the Humanities Department leads a discussion of Clash of Civilizations over an Elevator in Piazza Vittorio by Amara Lakhous.

The CIC series launched in October with a discussion led by Professor Daniel Sarefield (Economics, History and Political Science) about the book How To Be A Bad Emperor: An Ancient Guide to Truly Terrible Leaders (Selections from Suetonius, edited by Josiah Osgood).

The CIC, founded in 1999 with an initial gift from Amelia V. Gallucci-Cirio, encourages the understanding and appreciation of all aspects of Italian language and culture, including ancient and contemporary studies, and the Italian experience in the New World.