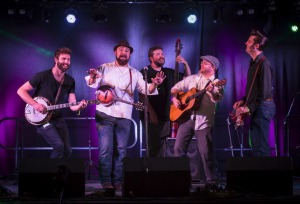 Experience The Who’s classic rock opera “Tommy” reborn as an unforgettable bluegrass work by the progressive Missouri-based band The HillBenders when Fitchburg State University CenterStage welcomes the band on Saturday, Feb. 10 at the Falcon Hub in Hammond Hall, 160 Pearl St.

Tickets are $28 for adults; $25 for senior citizens and Fitchburg State alumni and staff; and $5 for Fitchburg State students. Doors open at 7 p.m. for the 8 p.m. performance. Tickets can be purchased at the Weston Box Office in Weston Auditorium, 353 North St., Fitchburg, or by calling 978.665.3347. The box office is open 12:30 to 3:30 p.m. Thursday and Friday. Tickets can also be ordered online.

Nearly 50 years after the original release of “Tommy,” this classic of classic rock has now been fully realized as a full-length bluegrass tribute featuring The HillBenders. Conceived and produced by SXSW co-founder and longtime musician/producer Louis Jay Meyers, this “Bluegrass Opry” brings a new perspective to “Tommy” while paying total respect to its creators.

The HillBenders are one of the few bluegrass groups that recognize their ability to bridge the gap between the common music consumer and the bluegrass genre, selecting material that defies any hillbilly stigmas. With their widely varied influences, they are trying to bring to bluegrass songs that unify. “We wanted to pair bluegrass with the other music we grew up with —rock and roll!” says HillBender Nolan Lawrence.

“Tommy” was originally composed by guitarist Pete Townshend as a rock opera that tells the story about a deaf, dumb and blind boy, including his experiences with life and the relationship with his family. The original album has sold 20 million copies and has been inducted into the Grammy Hall of Fame for “historical, artistic and significant value.” In 2003, Rolling Stone magazine ranked “Tommy” number 96 on its list of the 500 greatest albums of all time.

Meyers had been looking for the right band to pull off this high wire bluegrass approach for several decades and The HillBenders are the right band. With a perfect mix of virtuoso musicianship and rock star vocals, The HillBenders bring Pete Townshend’s original vision to life in a new and exciting way.

It’s amazing to hear banjo, Dobro, mandolin, bass, and guitar bring the same energy and vision to Tommy as The Who did with a full rock band and orchestra.

About the CenterStage Hub Series

The show is part of the CenterStage Hub Series, providing the unique opportunity to experience national acts in a local, intimate setting. With just over 150 seats, the Falcon Hub offers a relaxed, coffeehouse-style room with comfortable seating, cash bar and a very cool atmosphere. The Hub Series is 21-plus.