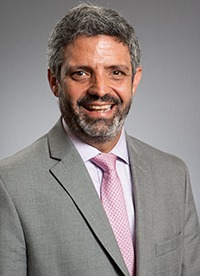 Fitchburg State President Richard S. Lapidus has announced that Alberto J.F. Cardelle, dean of the College of Health Sciences at East Stroudsburg University in Pennsylvania, has been named provost and vice president for academic affairs at Fitchburg State.

Cardelle, who will assume the role in July, was selected following a nationwide search.

“Dr. Cardelle’s knowledge, experience and temperament will be an asset to Fitchburg State as we move forward with the implementation of our long-term strategy, vision and goals,” President Lapidus said. “He was selected from an impressive pool of candidates, and I am confident that his academic background, leadership skills, and collaborative spirit will help us build on our many strengths even as we seek innovative solutions to the challenges that lie ahead.”

Cardelle earned a bachelor of science in biology and Latin American studies from Tulane University in 1986. He received a master's degree in public health/health services from Boston University, and completed his doctorate in international studies with a concentration in comparative health policy at the University of Miami.

“I am delighted by the opportunity to join the team at Fitchburg State,” Cardelle said. “In my discussions with the search committee and my time on campus, I was impressed by the strong feeling of community and enthusiasm for the institution’s future. I look forward to being part of Fitchburg State’s continued evolution.”

Cardelle was hired by East Stroudsburg University in 1999 as assistant professor of public health. He was promoted to associate professor in 2004 and full professor in 2009. Since 2013, he has been dean of East Stroudsburg’s College of Health Sciences, where he is responsible for developing new academic programs and implementing the college's strategic plan. The administrative liaison to six accrediting bodies, he also develops partnerships between the college and health care institutions in Northeast Pennsylvania and beyond.

He is the co-founder and co-director of the University's Institute for Public Health Research and Innovation, which brings together researchers from regional academic centers, medical centers and the pharmaceutical industry to carry out applied research. The institute is externally funded through grants and contracts currently totaling $1.5 million.

Cardelle has also been active in community work, including serving on the board of directors of the Hispanic Center of the Lehigh Valley and the Monroe County Economic Development Workforce Development Group and Monroe County Mental Health Taskforce.

Cardelle and his wife, Rachel, an associate dean at Northampton Community College in Pennsylvania, have three daughters, Marianela, Catalina and Josephine.