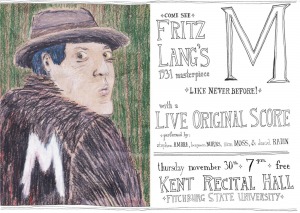 Director Fritz Lang’s groundbreaking thriller M will screen with the accompaniment of an original, live score on the Fitchburg State University campus on Thursday, Nov. 30.

The screening will begin at 7 p.m. in Kent Recital Hall in the Conlon Fine Arts Building, 367 North St. Admission is free and open to the public.

M, released in 1931, is a classic of German expressionism and a precursor to the “film noir” movement of the 1940s and 1950s, according to Fitchburg State instructor John Nolan. Boston-based musicians Sam Moss (violin/banjo), Daniel Radin (baritone guitar), Stephen Ambra (cello) and Benjamin Burns (percussion) composed an original score for the film and will perform it live to picture on Nov. 30.

The film stars Peter Lorre as Hans Beckert, a serial killer who preys on children and becomes the focus of a massive Berlin police manhunt. Beckert’s heinous crimes are so repellant and disruptive to city life that he is even targeted by others in the seedy underworld network. With both cops and criminals in pursuit, the murderer soon realizes that people are on his trail, sending him into a tense, panicked attempt to escape justice.