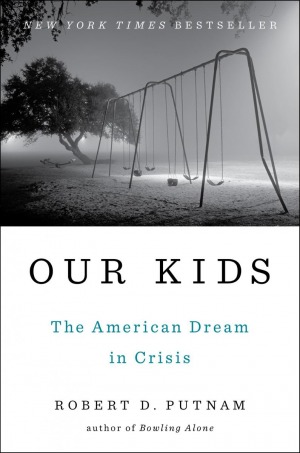 Fitchburg State will wrap up its Community Read of Robert Putnam’s Our Kids: The American Dream in Crisis with a keynote lecture by the author at 7 p.m. Tuesday, April 4 at Hammond Hall, 160 Pearl St. Admission is free and open to the public.

There will be an open reception with the author starting at 5:30 p.m. in the main lounge at Hammond.

Our Kids: The American Dream in Crisis is a New York Times bestseller and “a passionate, urgent” (The New Yorker) examination of growing social inequality in the United States. Putnam's volume offers a personal and authoritative look at a new American crisis where a growing "opportunity gap" has emerged over the past 25 years. The crisis challenges the traditional assumption that Americans who have talent and try hard will succeed.

Throughout the Community Read, which began last fall, the campus and wider audience is invited to explore Putnam’s book and the topics it raises. Events have included panel talks, film screenings and faculty presentations.

Putnam is the Peter and Isabel Malkin Professor of Public Policy at Harvard University. He is a member of the National Academy of Sciences and the British Academy, and past president of the American Political Science Association. He has received numerous scholarly honors, including the Skytte Prize, the most prestigious global award in political science, and the National Humanities Medal, the nation’s highest honor for contributions to the humanities.

He has written 14 books, translated into more than 20 languages, including Bowling Alone and Making Democracy Work, both among the most cited publications in the social sciences in the last half century.  His 2010 book, co-authored with David E. Campbell, American Grace: How Religion Divides and Unites Us, won the American Political Science Association’s 2011 Woodrow Wilson award as the best book in political science. He has consulted for the last three American presidents, the last three British prime ministers, the last French president, prime ministers from Ireland to Singapore, and hundreds of grassroots leaders and activists in many countries.

His latest book, Our Kids: The American Dream in Crisis, on the growing class gap among American young people, was published in March 2015.