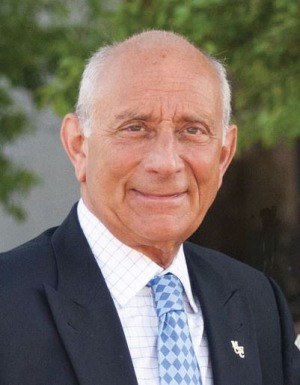 Daniel M. Asquino, president of Mount Wachusett Community College and the longest serving public higher education president in the state, will be awarded the President’s Medal at Fitchburg State University’s undergraduate commencement exercises on Saturday, May 21 on the main quadrangle.

Asquino is retiring in January after a remarkable tenure at the Mount.

“Dan Asquino has been a champion of education and community engagement throughout his distinguished tenure at Mount Wachusett Community College,” Fitchburg State President Richard S. Lapidus said. “He has been a loyal partner and generous community servant for decades, giving his time and talent to countless organizations and thousands of students.”

Since arriving at Mount Wachusett Community College in 1987, Asquino has focused his efforts on improving curriculum, community outreach and economic development. Under his leadership the College enrollment has grown to over 12,000 credit and non-credit students. Satellite campuses have been established at Devens, in Leominster and Fitchburg, and the number of academic programs has expanded to over 75 associate degree and certificate options.

During his tenure, Asquino has established the college as a state and national leader in the areas of workforce development and economic development; dual enrollment and K-12 partnerships; civic engagement; veteran services; and renewable energy.

He is a charter member of the Massachusetts College Success Campaign, The Democracy Commitment and the American College and University Presidents' Climate Commitment (ACUPCC).

Asquino holds a Ph.D. and M.P.A. in Public Administration and Political Science and a B.A. in Economics and Political Science from the University of Massachusetts at Amherst and Southeastern Massachusetts University, now UMass Dartmouth. He has taught public administration at the high school and college levels, including at the baccalaureate, master’s and doctoral levels.

The father of four and grandfather of nine, he enjoys spending time with his family, numismatics, music, fitness and reading.