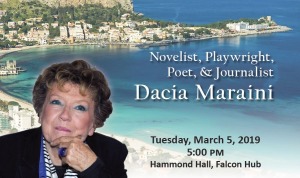 Acclaimed novelist, playwright, poet, and journalist Dacia Maraini will discuss her work at 5 p.m. Tuesday, March 5 in the Falcon Hub at Hammond Hall.

The daughter of a Sicilian princess and a Florentine ethnologist, Maraini was interned in a Japanese concentration camp with her family for refusing to recognize Mussolini's Republic of Salo. She went on to become one of the clearest voices for social justice of her generation.

During a life of world travel, she has written novels, short stories, plays, several investigative studies, and collections of poetry and essays, and her works have been translated into more than 30 languages and adapted for award-winning films.

She has won major Italian literary prizes and was a nominee for the Nobel Prize in Literature in 2012.

Maraini's visit is sponsored by the Center for Italian Culture and the University's Division of Arts & Sciences.