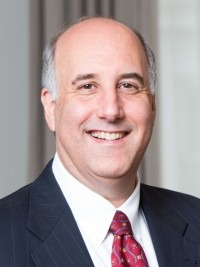 Dr. Richard S. Lapidus, a recognized leader in higher education, took office as the 11th president of Fitchburg State University in July 2015. A product of public education, he has long been an advocate for increased access and affordability for higher education. Since becoming president, he has been guiding the University by advancing teaching and learning excellence, fostering diversity and inclusiveness, and engaging the campus community as a steward of place within the city and region.

Prior to his arrival at Fitchburg State he served as the dean of the College of Business Administration at California State Polytechnic University, Pomona. During his time at the college, Lapidus implemented a new strategic plan and guided the college successfully through two Association to Advance Collegiate Schools of Business reaccreditation processes; a distinction earned by less than 5 percent of business schools worldwide. He provided direction and oversight in the construction of a LEED Silver certified $42 million College of Business complex and raised in excess of $24 million dollars in support of a wide range of college initiatives.

He has also held a number of positions at the University of Nevada, Las Vegas that included associate dean of administration in the College of Business and chair of the Department of Marketing. Earlier in his academic career, Lapidus held the rank of full professor with teaching and research interests in the areas of advertising, promotion and consumer behavior. His research appears in leading academic journals and conference proceedings on issues related to business and education. He is a past president of the Marketing Educators’ Association and served on the Professional Chapters Council of the American Marketing Association.

At Fitchburg State, he has guided the university by advancing teaching and learning excellence, fostering diversity and inclusiveness, and engaging the campus community as a steward of place within the city and region.

During his tenure he has invested in student success through the adoption of a revised general education curriculum that includes a first-year experience, designed to help establish students’ sense of campus community and strengthen their connection to both their discipline and the institution. Students are introduced to campus resources, practice time management, strengthen study skills, begin to consider career planning, and formulate a better understanding of cultural diversity, among other topics.

Dr. Lapidus also oversaw the adoption of a new five-year strategic plan that focuses on education justice, being a student-ready campus, and inclusive excellence.

He also established the entrepreneurship center known as the ideaLab at the Main Street theater block that the university purchased in 2016. This interdisciplinary facility located off-campus is designed to promote applied work and create interaction between students, faculty and working professionals. A major renovation of the theater itself is in the planning stages and will be a transformative initiative for the university and the city.

In addition, Dr. Lapidus supported the creation of a state of the art strength and conditioning center near campus, which serves the training needs of varsity athletes while also providing laboratory space for students in the university’s Exercise and Sports Science program.

Programmatically, Dr. Lapidus guided the launch of several fully on-line programs, including accelerated graduate offerings that have broadened the reach and reputation of Fitchburg State. The accelerated programs are targeted at working professionals in the areas of business, nursing and education.

Lapidus and his wife, Lisa, live in Fitchburg. They have two children, Zachary and Hannah.